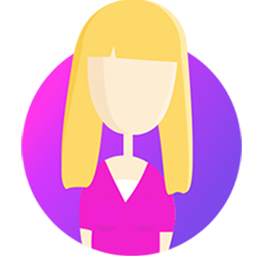 A mobile app for watching and sharing game content

Plays.tv started as a utility app for recording gameplay, and over time became a social platform with multiple features such as sharing videos, adding friends, commenting, and more. Last year, with an increasing demand for the mobile on the go experience, Plays.tv invested in development of a version for iOS, Android, and tablet.

During the time I joined the project, Plays.tv mobile app consisted only of the chat feature. Users complained that the app lacked a full suite of functions, such as watching their friends play while on the go. I was the only designer on the project and I had to build the majority of the functions from scratch. Within a short period of time I was able to create and ship the fully functioning app with a timeline feed, object pages, content sharing, and uploading features.

The biggest objective in this project was to create a cohesive experience across all platforms. However, the mobile app cannot fit as much functionality compared to a desktop app. For example, recording, saving files, and streaming features were not available on the phone. Therefore the mobile app's main features and accents will need to be different from what's offered in the desktop app.

Streaming and game capturing is a very competitive field. In order to come up with the best UI and UX for the mobile app I took to competitor analysis.
One of Plays.tv biggest competitors is Medal.tv, which has a very similar concept to our app. Twitch also offers streaming features, and Discord is similar in chat features (although they recently implemented streaming and recording features). Social media platforms such as Facebook, Instagram, Twitter, YouTube and so on can also count as competitors of Plays.tv. 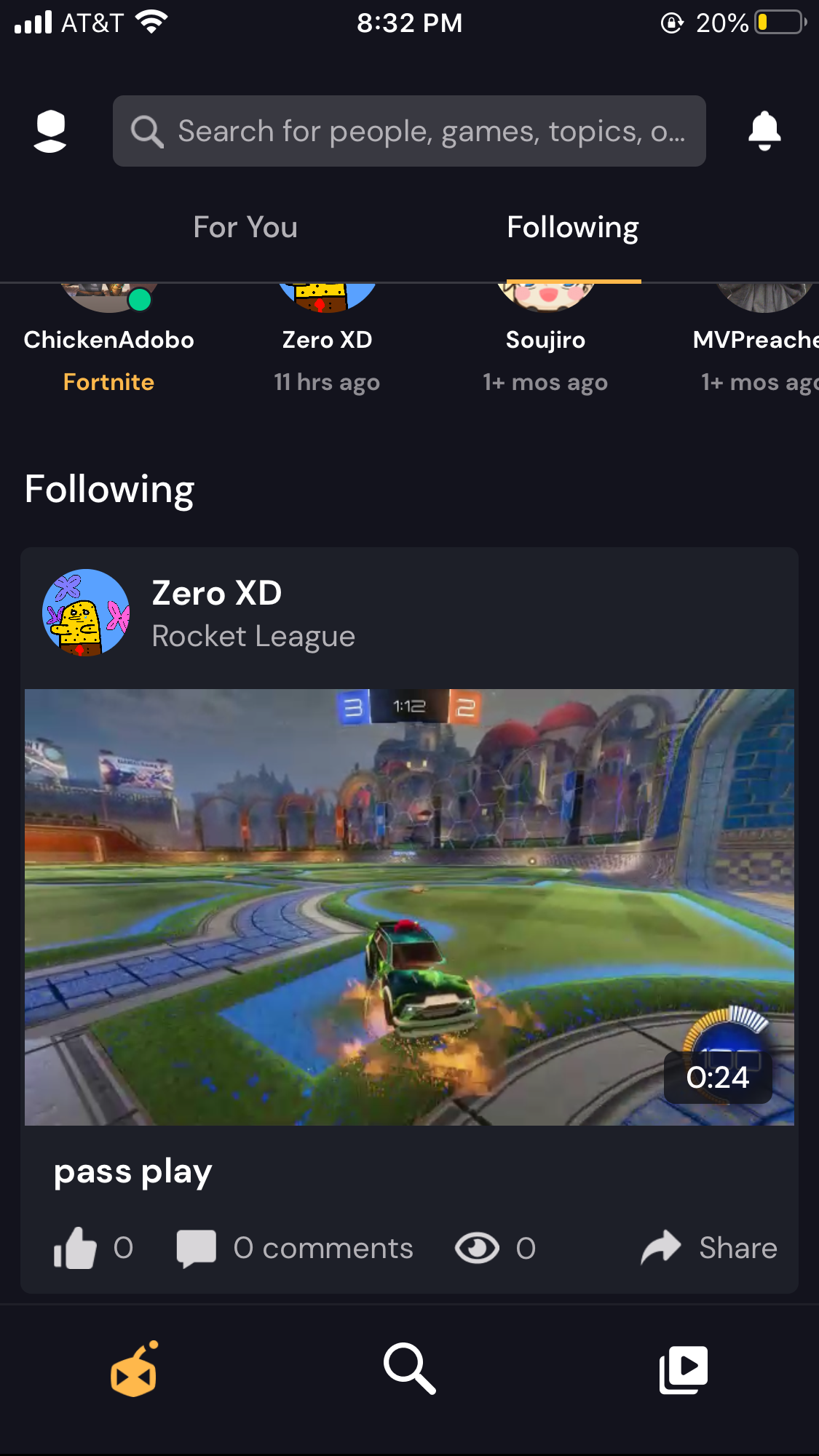 This app is very similar to Plays.tv as it allows viewers to watch user content on the go, like and comment, as well as record clips and videos (from your desktop).

Pros: Simple and distinct UI around posts on their feed. Shortcuts to 'favorite users'. Medal.tv bills itself as the first to offer clipping services for the private games that more casual gamers play among friends and far-flung strangers around the world.

Cons: Doesn't have variety of reactions, no library access, doesn't have chat feature. 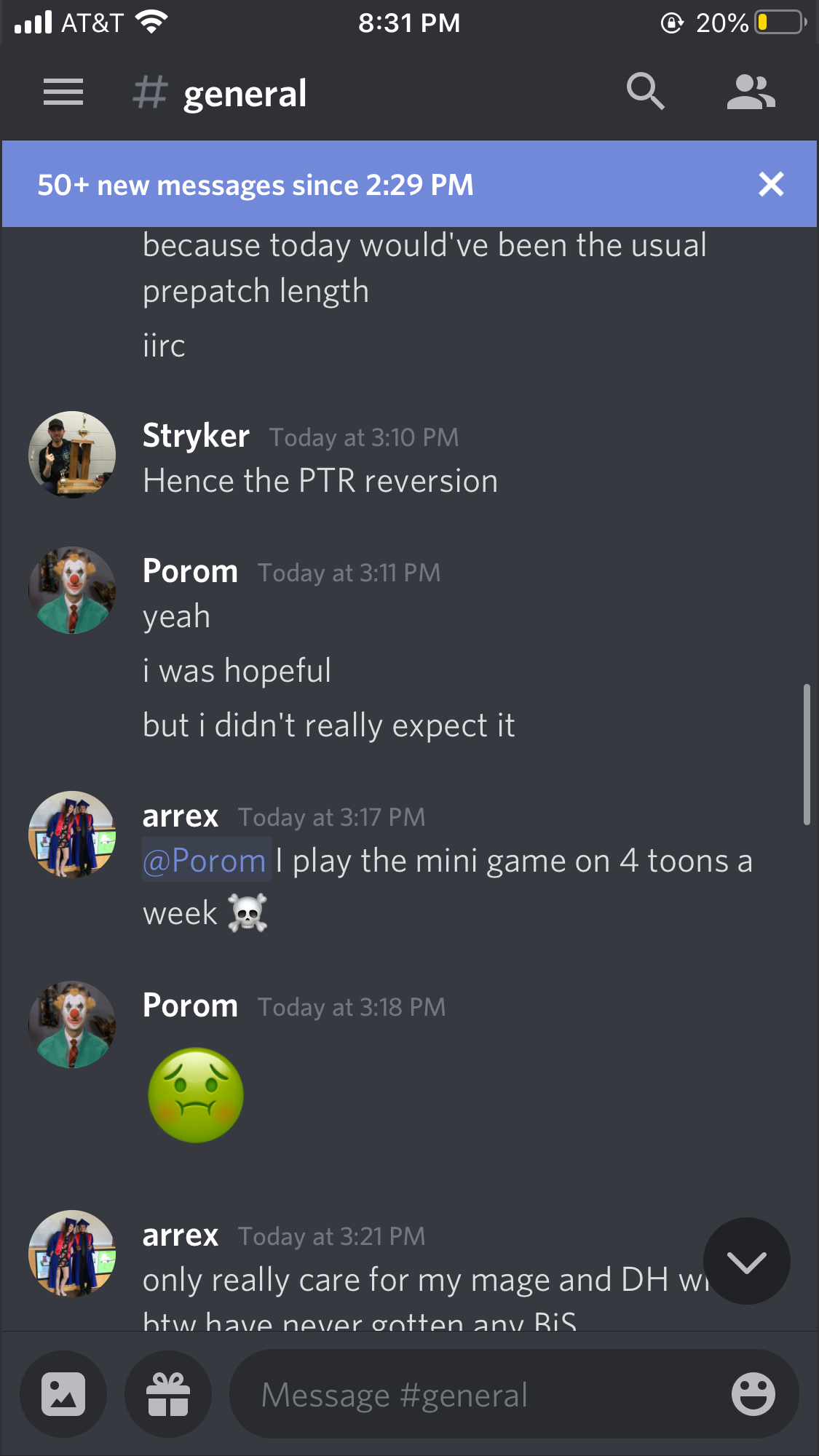 Discord
‍
Discord is instant messaging and VoIP application and digital distribution platform designed for creating communities ranging from gamers to education and businesses. Discord specializes in text, image, video and audio communication between users in a chat channel.
‍
Pros: It's available to download for free for Windows, Mac, Android, iOS and even Linux. You can also use it straight in a web browser without even downloading it. Ability to chat with each other either one-to-one or as a group via a server.  You can use it to send direct messages to friends, have video calls with them, voice chat and even screen share.Streaming is also available on Discord.

Cons: 'Discord Nitro' experience with access to things like animated emojis, bigger file uploads, higher-quality streaming options and more. It's priced at $9.99 a month or $99.99 a year. 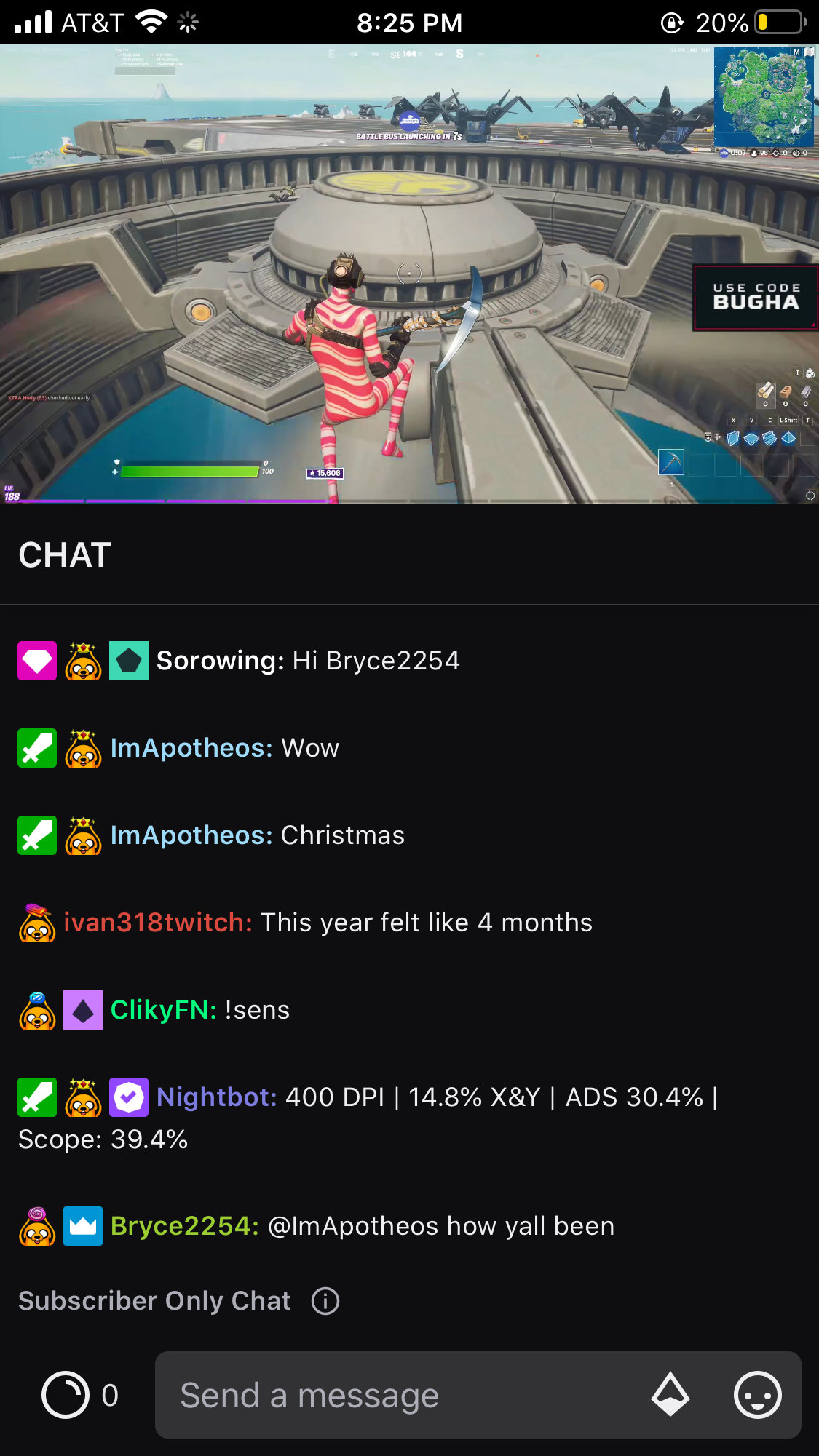 Twitch
‍
Twitch is a live streaming service.
‍
Pros: Streams can last anywhere from a minute to eight-hours and beyond. You can find a stream by browsing various categories, including specific games.While viewing a Twitch stream, you can comment alongside other viewers, and depending on the channel, you may be able to do things like make suggestions or ask questions and receive real-time answers. Twitch also saves streams, so you'll have the option to watch previously streamed gameplay or shows.
The company has launched iOS and Android apps so users can get all the same content — from people to channels — alongside a host of mobile-friendly features wherever they are.

Cons: Doesn't have timeline feature. Twitch offers subscriptions for those who find themselves getting more invested, with three tiers, ranging from $4.99 to $24.99 a month. Subscriptions allow you to support your favorite streamer and grant you the ability to watch a channel ad-free and access other perks, like emotes or chat badges. 'Live streaming' can be unpredictable and unsafe for kids.

While the competitor apps in gaming industry have similarities in their styles, they are also very different in the set of features they offer. For example, Twitch is a live streaming service, Discord is a chat service, and Medal is social media platform. Plays.tv stands out as an all around tool for streaming, recording, and chat, combining a wide range of features in one app.

I decided to set the user personas around the two major use cases I identified while interviewing users and talking to PM's. I came up with persona types that define potential customers of the app.

• Mike is a casual gamer who loves to see his friends play and win.
‍
• Joe is a professional streamer who relies on the app's performance and quality. She uses the platform to connect with her followers.
‍
Both persona types require easy and simple navigation when using the app. They also want their experience to be bug free and display media objects/elements correctly. 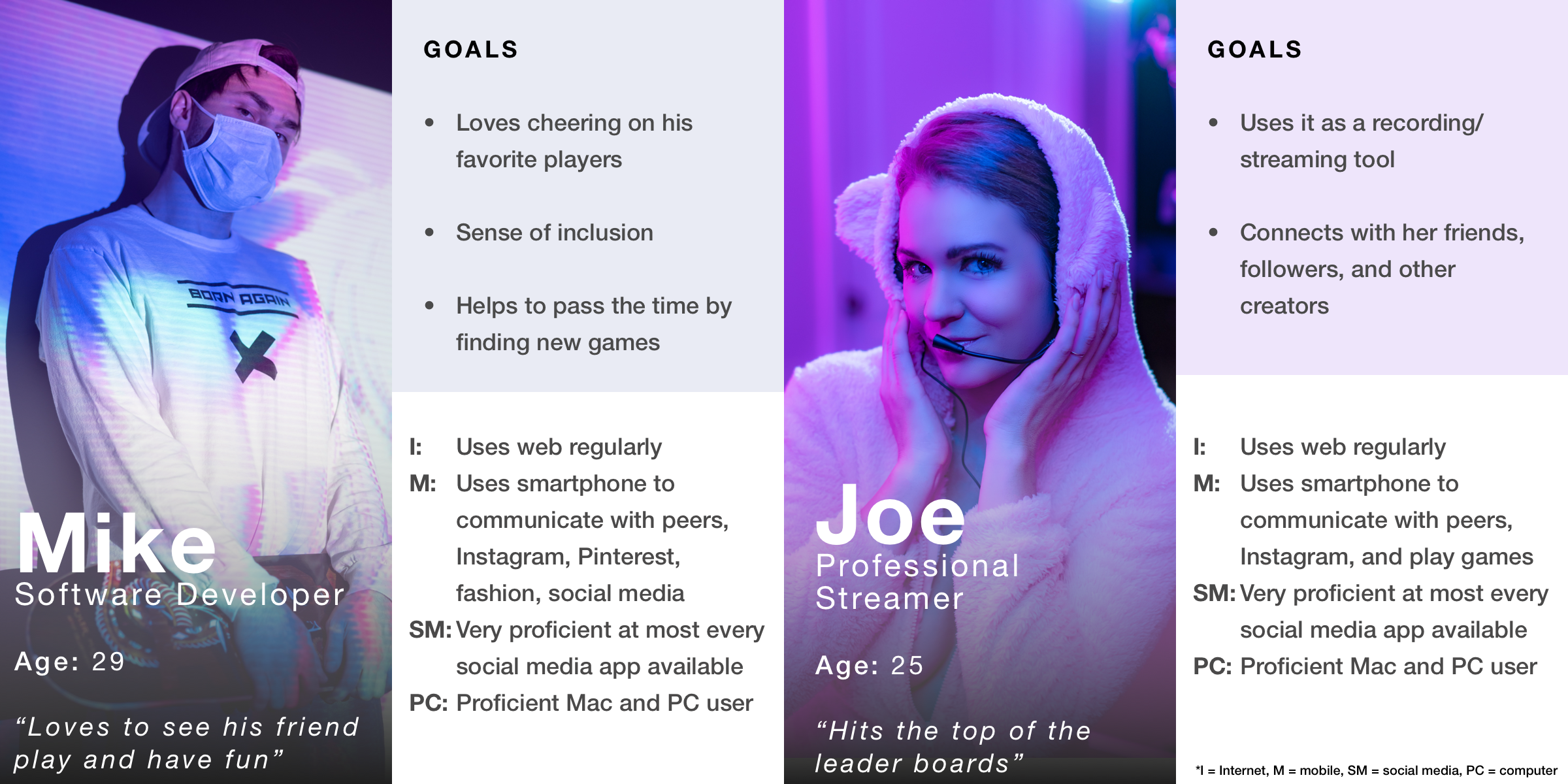 a. Linking and Commenting
‍
Mike, a returning user of the app, wants to see new posts so he can react and comment to them. His steps would be: 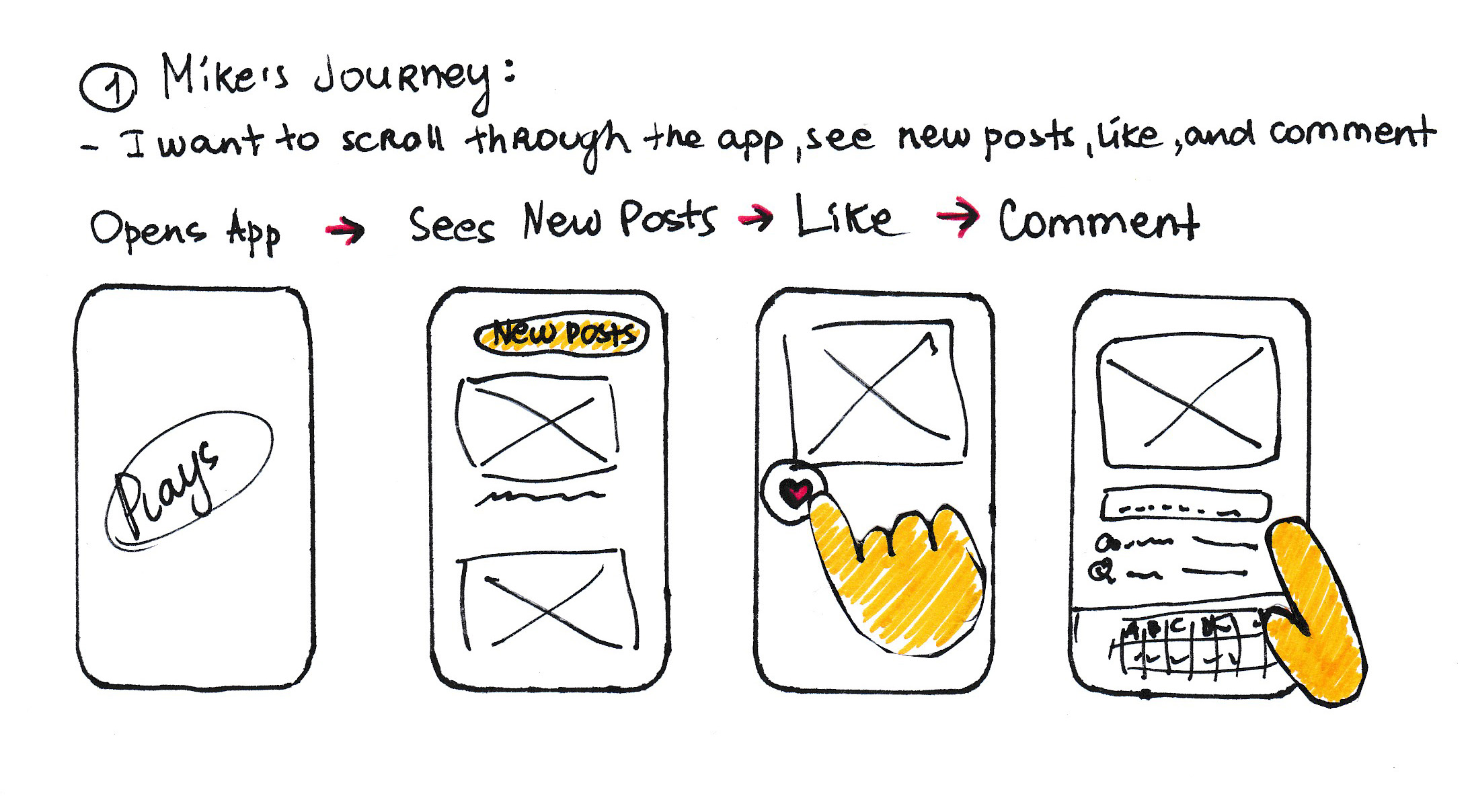 b. Uploading content from mobile phone
‍
Joe, a returning user of the app, wants to share her prerecorded clips and screenshots to her Timeline. Her steps would be:

1. Go to My Uploads tab
2. Choose a media object & click share
4. The new window will allow her to select Timeline and/or specific users
5. Press 'Publish' to confirm
6. Conformation banner will appear as the object is published
‍

The section below is dedicated to UI examples of what was implemented in the actual mobile app. The key areas of the app are grouped into subsections.

‍This tab allowed the user to watch, comment, and share from the timeline, as well as the ability to see notifications, use reactions, and repost friends' content. 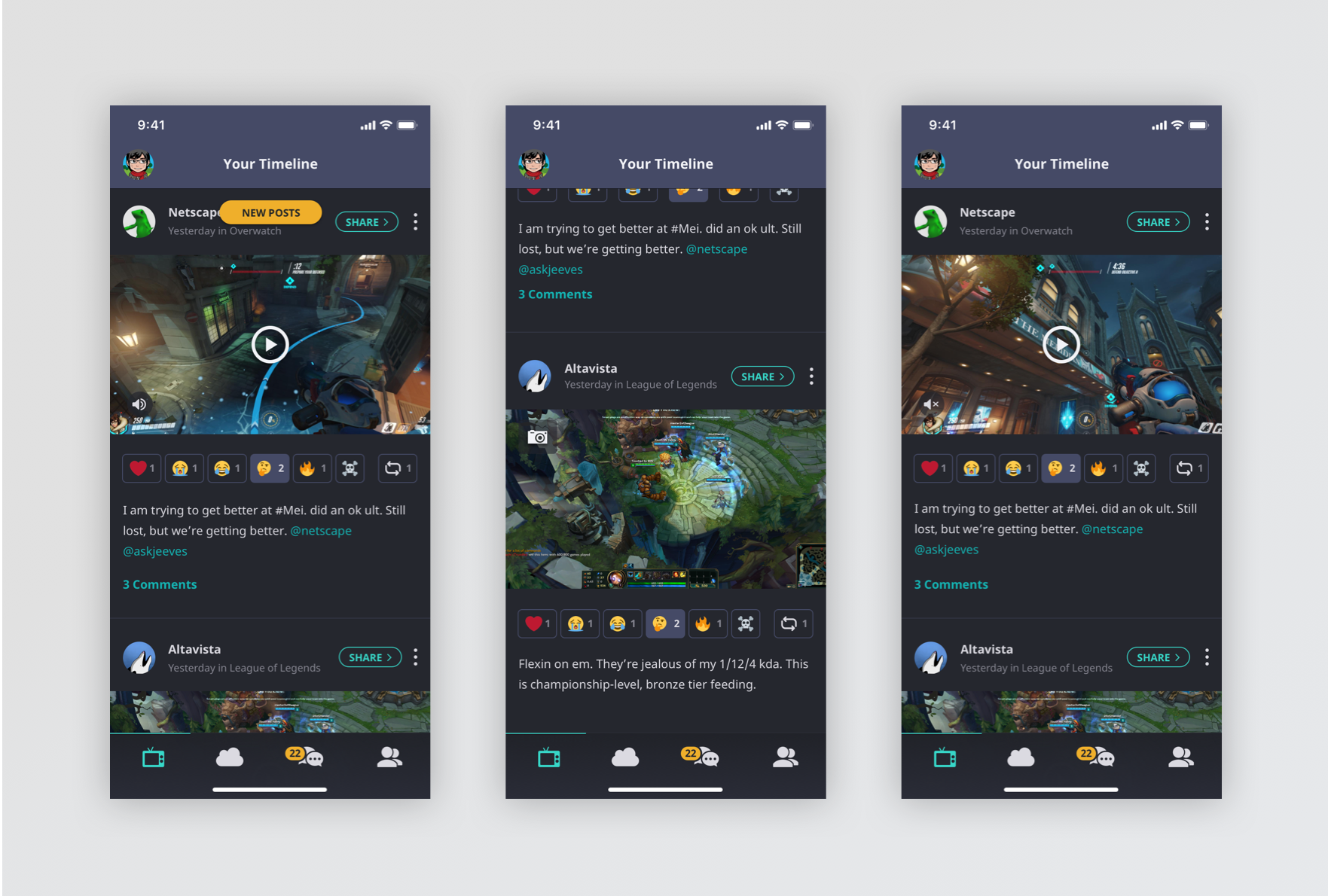 ‍One of the challenges with Uploads tab was to differentiate it from the Timeline. To solve this, I used smaller preview images and descriptions. I added icons for video clips and screenshots so users can easily know what content they are looking at. From the Uploads tab users can share their content in chat and post to the Timeline. 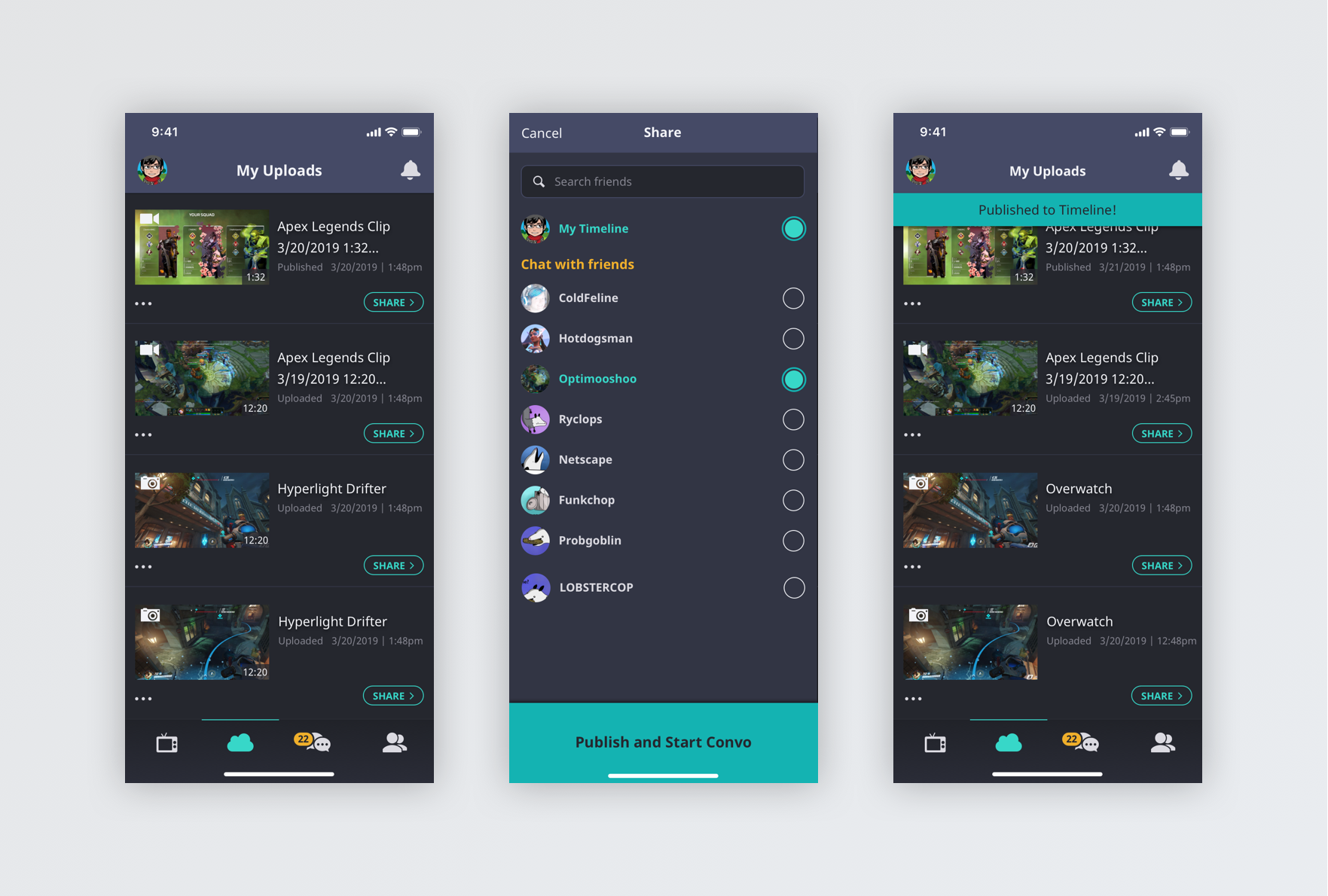 ‍The app allows users to comment on posts. Users who owns the post are allowed to edit description, publish, unpublish, send (share outside of the app), and delete. 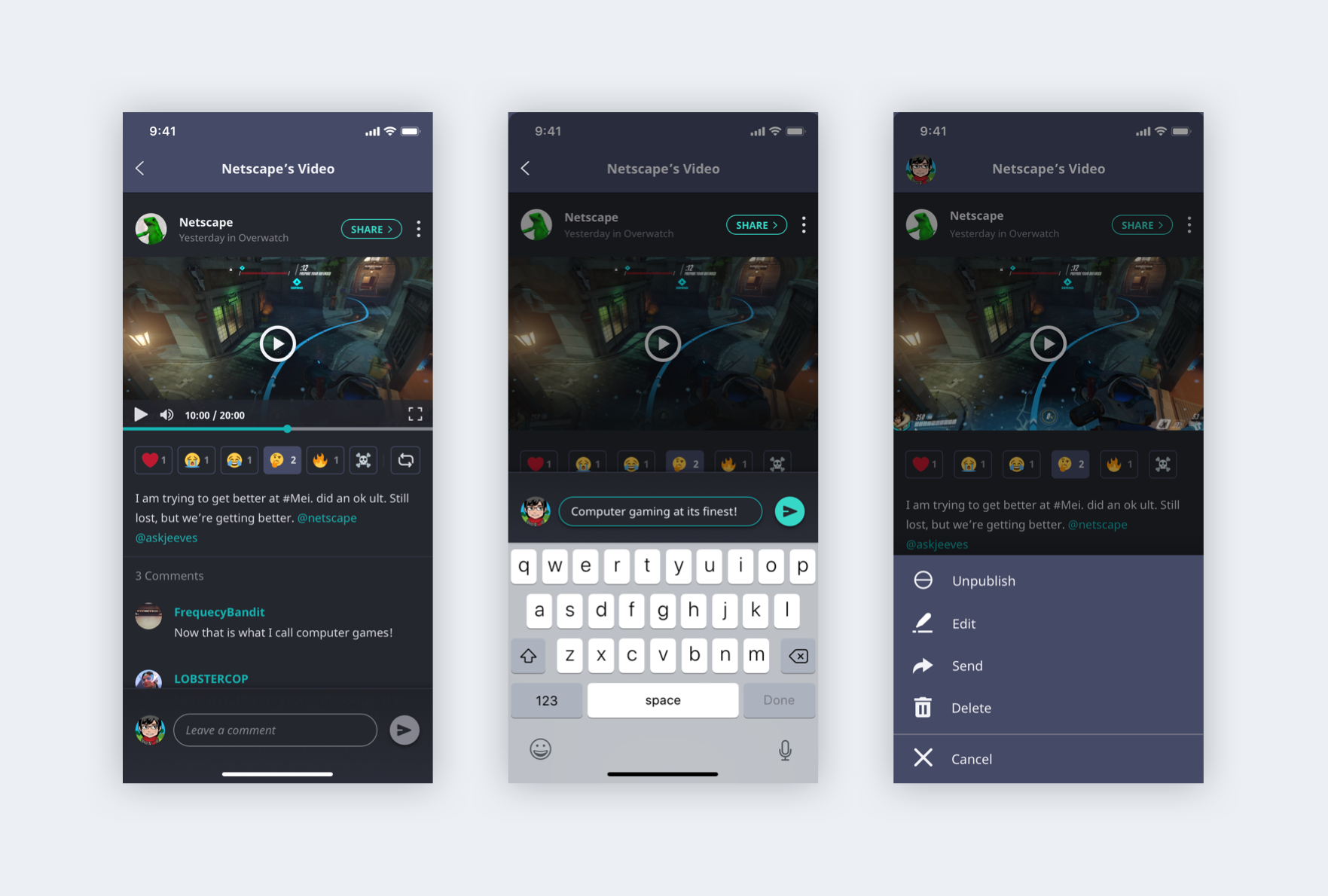 The app was designed for various resolutions and proportions such as iPhoneX, iPad, older iPhones, and Android.

A list of improvements helped to keep track of all the changes in the app. As two different teams worked on the mobile app (one for iOS and one for Android) over 16 different changes were implemented for each OS.
Peer feedback was the main source of evaluation of the app while in development. All of the employees of Plays.tv had access to the builds and could share their opinions, typically a week after the sprint. 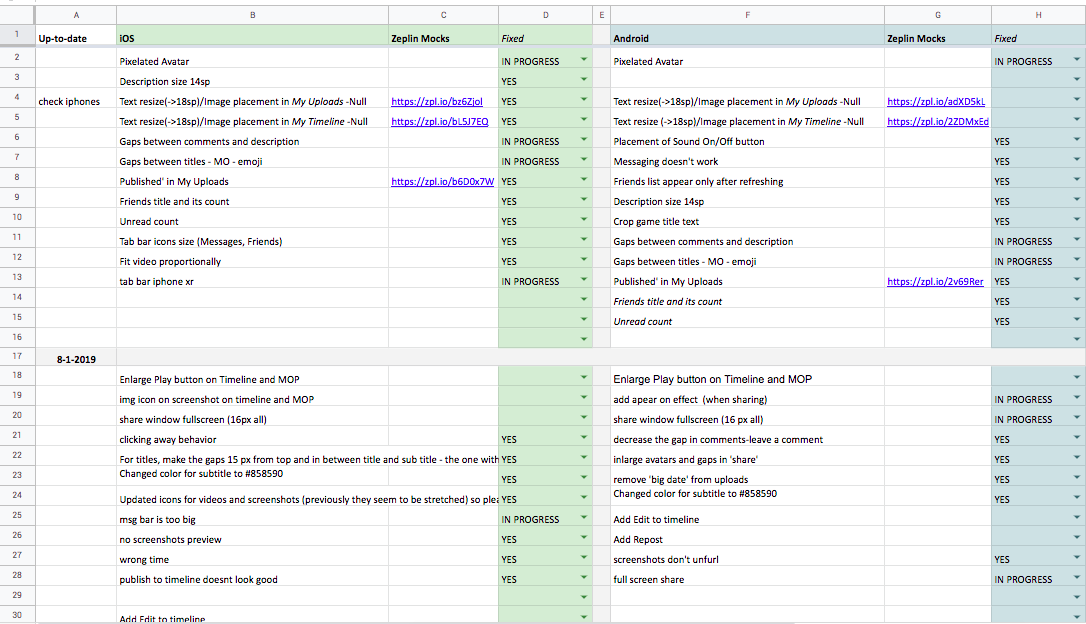 Issues & Changes in the app

The new version of the app launched in September 2019. The project turned out to be a great learning experience as it helped me to understand the needs of gamers in combination with the social media aspect on mobile.
This project also provided me with experience working remotely with different countries and time zones. I learned to plan and delegate tasks based on the nuances of different regions.

The app is available in the App Store and PlayStore as well. 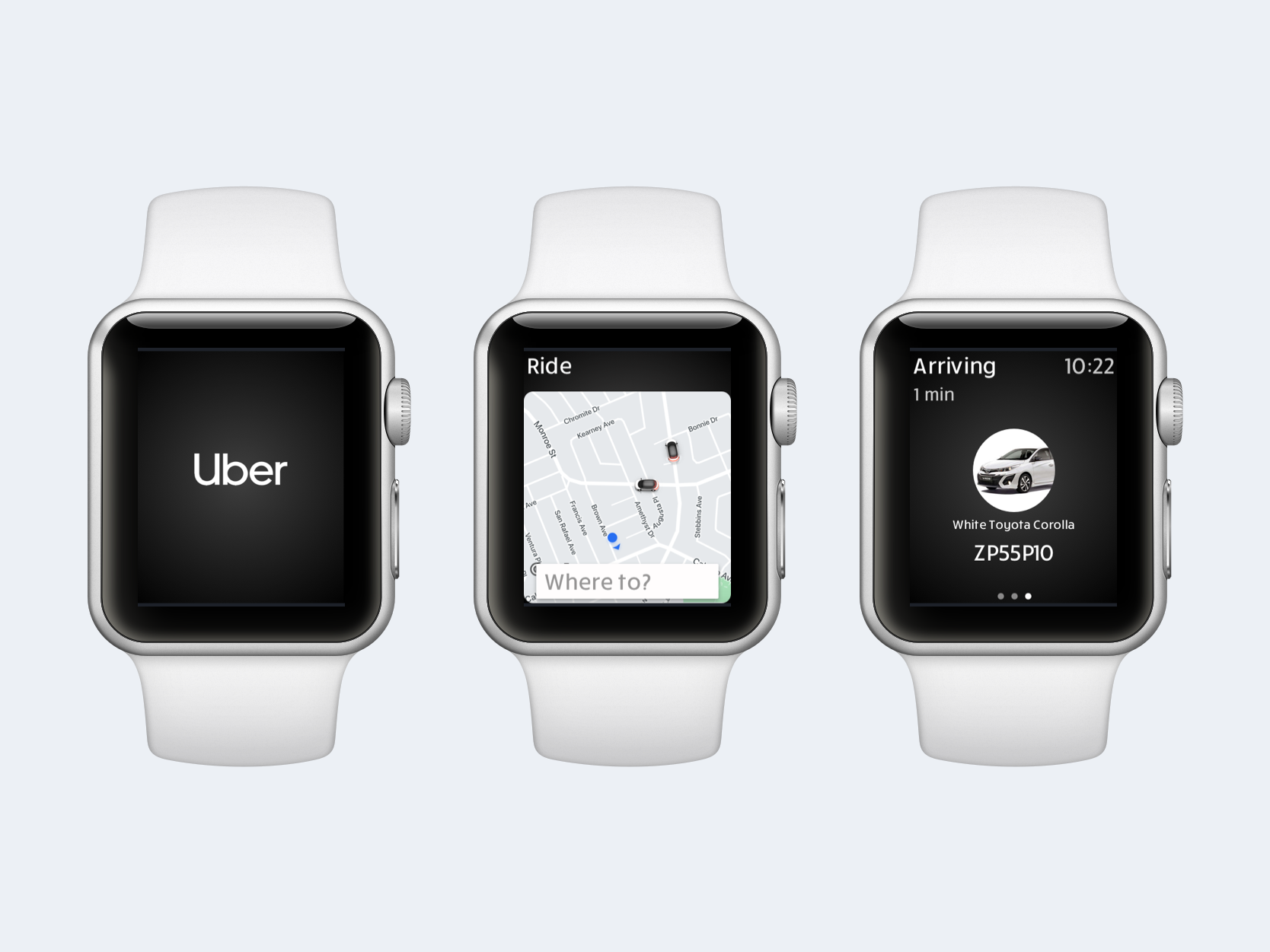